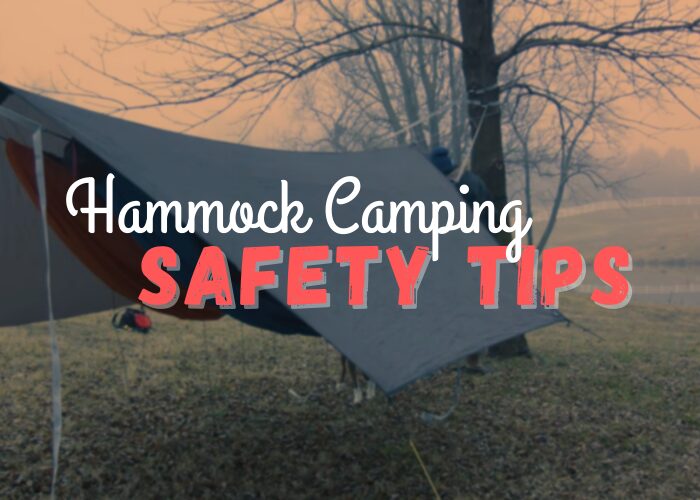 The good news is that when it comes to bears, there is no increase in risk by camping in a hammock instead of a tent. Unfortunately, though, bugs will have an easier time getting to you.  One thing to note is that all of the risks that are generally associated with tent camping still exist when it comes to hammocks.

Why is It Scarier In a Hammock?

Sometimes people ask me why they feel more scared camping in a hammock than they do in a tent. At first, I thought this was because they were hanging in the air but now I think it is because they are more exposed. For some reason some people have a fear that an animal is going to walk into them, this is unlikely as animals can see and they don’t normally walk into things. Most of this fear is all in your head.

Part of learning how to camp in a hammock is overcoming the mental boundaries that come with hammock camping. It’s things like being scared of nature along with other mental challenges that make Hammock Camping so thrilling. It’s also very comfortable and can be the most relaxing way to enjoy nature.

How to Keep Animals Away From Your Camp

If you are being a slob and not taking care of your campsite there is an increased chance that animals will wander on by it.  In order to keep them out, you just need to clean up after yourself. Depending on where you live the way you should store your food may look differently and I’ll get to that in a second.

The number one rule for keeping animals away from your campsite is not to leave food around. Leaving leftover food sitting around will no doubt attract animals. If you’ve cooked meat and did not clean up there is a good chance it will attract carnivores like bears and wild canines. Those are two types of animals that you do not want to stumble across in the wild.

Speaking of cooked meat, I like to do all of my cooking downwind from the campsite. I like to do this about a hundred or so yards away from where I’m sleeping. I suggest cooking however far away you are comfortable with but remember that these animals are not accustomed to people.

Here are some other things that you can do to keep animals away from your campsite:

People who camp in a place where they are unlikely to see bears will often leave their food packed in their bag or in a cooler overnight.  This definitely works in a lot of scenarios and might be an ok practice somewhere where there is a lot of people. If you’re camping somewhere that is known to be a place where bears live, you are going to want to take a different approach.

What you are going to want to do is called a bear hang. I like to do this with a food Barrel, but you can use any container that you can tie a rope or cord onto.  it’s really simple to do here’s how:

That’s it, you’ve tied a bear hang.  It’s pretty easy to do and you don’t need much to do it. It’s a very good idea to do this if you’re in bear territory, however, you still need to keep your food sealed to keep other critters like squirrels and flies away.

Know the Animals in Your Area

If you really want to know the risk of bears when hammock camping then you should look into the habits of animals in your area.  It would be silly to be worried about bears if you lived in a place where bears don’t even live naturally.

From doing years of camping in North America I can tell you that the risks concerning bears are higher in the northwest than in the northeast. This is because the small Eastern black bear poses much less of a threat to humans than the large Grizzlies found in the Rocky Mountains.

I  am not a bear expert, and I cannot tell you the habits of bears found around the world.  I think it’s best that you do your own due diligence concerning bears, and other animals, in your area before going camping. When it comes to wildlife, bears usually aren’t your biggest threat so it’s wise to know about other animals in the area too.

Other Animals to be Aware of

When camping, regardless of if it’s in a tent or a hammock, there are animals and wildlife to be concerned about other than bears. Raccoon, snakes, and poisonous plants are all examples of living creatures that could pose a real threat to your camping trip.

Animals like raccoons are annoying and it’s best to try to keep them away but they usually aren’t dangerous. Sure, they might be able to carry diseases but they probably aren’t going to attack you, actually, they are more likely to spread your garbage all over the place. Still, you should keep your guard up and not get close to them.

Venomous animals like snakes are probably the biggest threat to your personal safety as far as wildlife goes.  If you’re camping in a place where this is a real risk then it’s important to be aware of that. You need to make sure that you look before you jump out of your hammock in the morning. If you have venomous spiders in your region you might want to check your boots before putting them on too.

If you’re camping in a place where plants might pose a risk then it’s good to know what those plants look like. I’ve had experiences with poison ivy and poison oak that I would like to make sure don’t happen again. If you are backwoods camping it is possible that you could put your hammock over one of these plants by accident. Make sure that you know what’s around and bring any ointment or medicines that might help in a worst-case scenario.

Many people get parachute hammocks, like Grand Trunks and ENOs, believing that they bought a camping hammock when it’s really not the case. One of the first indications of this that people will notice  is that mosquitoes can bite right through the bottom of many of these. Hammocks that are intended for camping like Dutchware’s, Hennessy’s and Warrbonnet’s; are built to protect you from mosquitoes and other backwood bugs.

If you have a parachute hammock and want to go camping during mosquito season then you aren’t totally out of luck. Many companies that produce hammocks also produce bug nets specifically for hammocks. If you are looking for a bug net for a hammock keep an eye on the thickness of the mesh. Cheap hammocks that have bug nets aren’t always the best.

Many of the aftermarket bug nets are really cool and they cover the whole hammock from top to bottom. ENO is one example of a company that makes aftermarket mosquito nets for their products.

Some companies like Hennessy Hammocks actually make a model of hammock specifically for camping in places with intense insects; no wonder they named that model the Deep Jungle!

Keeping Bugs Away From You

Sometimes when you are camping just keeping the bugs away from you can be one of the hardest things to do. I personally haven’t found a technique that completely solves the problem but here are a few things that work for some people;

Over the years I’ve come to learn to just deal with the bugs. I am also aware of where the bugs are bad and when. There have been times that I’ve actually changed my camping plans because the bugs are so bad and there’s no shame in that!

Our Impact on the Wildlife

I’ve been talking so much about the environment’s impact on us that I haven’t stopped to think about the impact that we have on the environment. I know a lot of people already take this into consideration but it’s important so I feel that everyone should. I’ve already written an article about how hammocks can impact trees, but wildlife is more than just that.

Please make sure you pick up your trash. I don’t feel so bad about using dead wood for burning or even as tools, but please don’t kill living trees; they are there for all of us to enjoy!

While I am on the subject, I would just like to take a moment to encourage Leave No Trace camping. This means I encourage everyone to try and make sure that they leave no evidence of their presence whenever they camp. If you use a permanent campsite or find an already developed fire pit in the woods, I encourage you to always use that instead of building a new site or pit.

So you have read my post and have determined that bears aren’t really as big of a threat as you thought they were. You may still have some reservations about hammock camping but a lot of this is probably all in your head. If you are still afraid of the wildlife and how that relates to hammock camping specifically then stop and think about the risks involved in tent camping and you will find that they are no different.

I hope that you are able to enjoy camping in your hammock without worrying about animals or anything really. If you are still concerned about camping and animals leave me a post below and I’ll try to see if I can help you out. If you spotted something wrong or have something to add, you also should leave a comment and I’ll do my best to address it.